Knowing and recognizing traffic signs is essential to pass the traffic test! The Highway Code courses that are taught during your apprenticeship will allow you to acquire this fundamental knowledge of road safety.

Learn to recognize traffic signs to succeed in your traffic laws!

The French highway code is made up of numerous traffic signs. These traffic rules define the obligations and prohibitions of all users to ensure their safety on the road.
Road signs are very old. Since the Roman Empire, there have been direction signs in France! But it was really from 1908 that the traffic signs that we know today appeared. Indeed, the international congress of the road of October 11, 1908 sets up a symbolic representation on the traffic signs in order to face the important development of the automobile at the beginning of this century.
Positioned on the side of the road, they have several functions:

The panels are classified into several categories. Thus, whether their objective is to prevent a danger, prohibit a maneuver, or even indicate a direction, they respond to particular shapes and colors.
Indeed, the panels respond to very specific shapes depending on the message they convey:

Danger signs (type A)
So-called “warning signs”, these danger signs are triangular in shape and are characterized by a red border to announce an immediate warning. The danger can be more or less close and from different sources. By convention it is said that they are placed 50 m before in built-up areas and 150 m outside built-up areas.
An exception to this rule however. In the highway code there is only one sign which is a warning sign and which however has immediate effect. This is the two-way traffic sign. To learn by court is a question that often falls under the examination of the highway code 😉

Thus, these warnings concern areas where the driver’s alertness must be greatly increased and in constant alert. This is the case, for example, with danger signs announcing ice, or a crossing of children, or even an air danger area.

These circular signs all convey a formal prohibition message. They are haloed in red to be more impactful for users.
The prohibition signs are numerous and easily recognizable. We think of the famous signs of the prohibited direction, prohibited parking, or speed limit. They mark the limit from which the prescriptions they notify must be observed. They can be supplemented by a sign.

Like the prohibition signs, these simpler obligation signs are always circular, but this time blue or white. The message here is more moderate, even if it remains mandatory. This is the case, for example, with mandatory minimum speed signs, or with an obligation to bypass by the right or the left.

The following sign, on the other hand, is an exception to the standard which requires that a circular blue sign is an obligation: public transport vehicles are not obliged to use the lane reserved for them, they also have the right to ” take the general route. Here it is

These panels are square and allow users to obtain certain information about the uses of their location. Blue or white, the indication panels are multiple. For example, there are signs indicating recommended speed or dead ends.

These are information signs providing information to all users. Thus, square in shape and blue in color, these panels linked to users can be linked to trams, buses, etc.

priority road signs: they are diamond-shaped and yellow and white in color. They indicate to the driver that he is on a lane where he has traffic priority, while remaining vigilant at intersections. In built-up areas they give priority to 1 km and 5 km outside built-up areas. 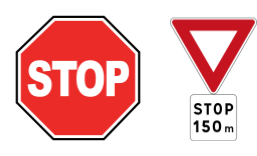 They are rectangular or square. Their colors are blue, white and brown. They provide indications on a locality. These location panels thus make it possible to indicate notable places such as historic monuments and other information useful to users.

Very clearly formed by an arrow or rectangular shape incorporating an arrow symbol, these panels indicate a direction. Their interest is to guide the driver of a vehicle.
Direction signs in France can take five different colors, all of which have a specific meaning. They are not yet standardized at European level. Here is the French standard in force:
blue color: This is a highway indication
green color: These are routes between major cities
white color: This is a more localized route between small towns
yellow color: This is a dual route or detour
brown color: These are places of tourist and cultural interest

The signs
The signs are small panels complementary to the main panel. Square or rectangular, they provide subsidiary information to the message conveyed by the main indicator. They are divided into twelve categories M1 to M12.
They are positioned at the base of the signaling element. They can for example provide information on the distance, the category of vehicle concerned, etc.

There are other signs that are difficult to fit into a specific category. We think of the removed signs or the bilingual signs that can be found in certain French regions.

The positioning of the panels
Road signs must be placed so that they are visible to drivers. They must also be easily recognized in order for their message to be effective. Thus, the positioning of the panels must be done at a height sufficient to be in the driver’s field of vision. It must also be at a distance allowing the readability of the information it delivers. The message is often repeated by several panels in a row.
In all cases, the sign is placed on the same support and in the same plane as the panel with which it is associated.
If two panels must be supplemented by one or more panels and if, in application of the principle of concentration, these panels must be grouped, it is preferable to install them in the same plane but on separate supports. However, if for reasons of space, two panels must be installed on the same support, the following provisions will apply:
if only one panel has a tab, the panel and the tab are placed above the second panel;
if the two signs have at least one sign each, each sign must be associated with its sign (s) except when a danger sign is associated with a prescription sign; in this case it is useless to repeat the same sign under each panel. The common sign (s) are placed under the prescription sign itself placed under the danger sign.

These panels are made of aluminum or galvanized steel. They are extremely weather resistant and their dimensions are regulated.